To see what jewelry creations are currently available Click here!

WHAT AM I SUPPOSED TO BE DOING?
I don't think I've yet found my "medium". I think beads and jewelry is a LOT closer than my previous attempts at creativity (music and writing), but I'm not sure exactly WHAT I'm supposed to be doing (or concentrating on).

At times I feel like a Jack-of-All-Trades, Master-of-None. I've tried my hand at polymer clay, lampworking, metal-smithing, etc.

If I think about what strikes me when looking through the work of other people, I'd say metal work… mostly. But I don't seem to have a burning desire to learn/do most of the things that involve metal work. Wow, that's a kicker, isn't it.

I've only just begun (as of last month) to explore the world of metal clays. That does seem more up my alley than sawing and soldering. Not that I never want to saw and solder… I just don't want to do it all day long.

Now, don't get me wrong, I like the fact that I'm multi-faceted in my exploration of jewelry design and creation… it's just that I don't feel I'm doing anything special yet.

Since so many of us are starting adventures in metal clay (okay, some of you are already kicking butt at it and the rest of us are just starting out), I wanted to share a few links to information I found interesting and/or useful.

This is Hadar's blog. "Hadar" is Hadar Jacobson… one of the front-runners of the PMC movement.

Celie Fago is the other front-runner that comes to mind.

Those two websites need much exploring. They are fantastic and very inspiring.

Here's an Etsy MetalClay blog. I'm guessing maybe it's part of a street team. Y'know, that thing that keeps eluding me even when someone emails me and asks me if I'd be interested. Ha ha ha!.

Anyway, if I get home early enough, I may get to do our first firing. Will give you an update tomorrow or…

Got a calendar in the mail from them today (a thank you for agreeing to product test for them). The funny thing is, although it's mid-March, I actually didn't have a calendar yet for 2009. Pathetic, huh? Ha ha ha! But I love my new beadie calendar. Makes me want to make one myself. Geez… are all creative people like that (always wanting to try something they see)?

I uploaded the ONLY pictures that came out decent from my last photo session (oh yeah, don't get me started about that. 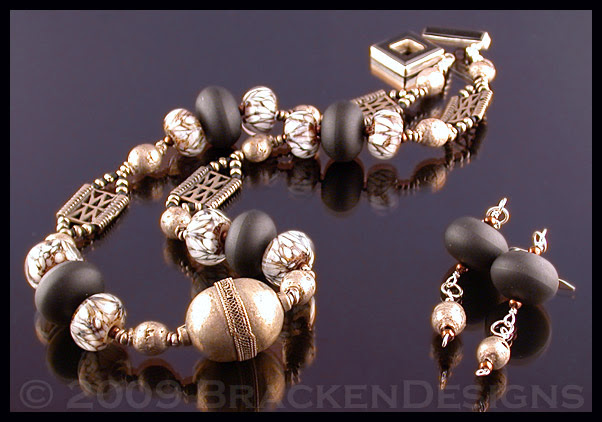 I hope to have it listed sometime this week. Those are beads by Jerrisglass, btw.

And speaking of this week, I just realized I'm in the middle of a large custom order for someone in Texas. Hm… maybe I won't get to any listing this week.

SARAH
That was so nice of you to leave a comment… and such a nice comment too! Thanks!

Handy Reference Guide of Things in this Blog