To see what jewelry creations are currently available Click here!

The Organizing Journey Day 23 -- It's That Time of Year

I remember reading, while I was pregnant many years ago, that in the days before going into labor many women have a burst of energy specifically geared toward "preparing the nest".

This is sort of how I feel about New Year's Day.  Starting in late November, I start feeling like I want my house in order.

And so here I am back at it in earnest (between all my other life obligations and segues).  I've kind of managing to keep the kitchen and living room clean (okay, it's mostly because I've had a lot of company lately).  But I also made a decent dent in my bedroom.  And as I was cleaning/organizing, I kept finding things and going, "Oh wow, I have been looking for that."

So last week a friend was over and was mentioning that she needed to pick up some scrap leather.  I have some!  Bah!  You guessed it... I have no idea where.  I have no less than 20 boxes of stuff that needs to be sorted for the workroom.  While I won't be getting rid of everything, I will be storing the less used items off-site (meaning, in the garage or something).

It bugs me, seriously bugs me that I don't know where something is when I want it.  I am determined to put an end to that.  A place for everything and everything in its place.

As a start to that, there is that "first step" which is just the bulk organization tactic.  It works, though.  For example, I may not have time to SORT all the pieces of paper in my life, but if I have all the unsorted papers in one pile, at least, that's just one pile I have to look through when I'm looking for something.  It sounds daunting but not HALF as daunting as running around LOOKING for pieces of paper hither and yon.

So yeah, I'm excited to get this over and done with once and for all and then just MAINTAIN.

I also am hoping (fingers crossed) to get all the things listed on eBay or Etsy that I no longer want/need in my life yet are too good to just throw away or donate (yes, I'm stingy like that).  But seriously, a lot of what I have is niche stuff... and I'd rather have it go to someone who actually wants it than to think it's going to sit in some thrift shop for life.

So this is going to be brief because I have to get back to it now.  But I just wanted to touch base and let you know I *am* working toward the goal and I'll show you some of the good ideas I am implementing (when I get around to taking photos).  Right now I'm just gonna say the dollar store is your friend.  Don't go elsewhere for storage bins.  :-) 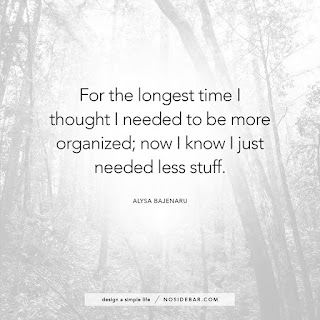 Handy Reference Guide of Things in this Blog